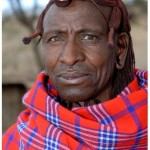 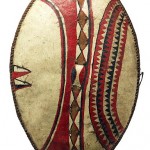 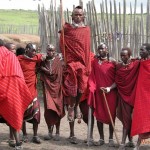 Maasai is semi- nomadic people living in northern Tanzania and across the border to Kenya. It is the only group allowed of free travel over the borders (Tanzania & Kenya). Their residences near many National Parks along with their well distinctive customs and dress code make them probably the most well-knows African ethnic group in the world.

Even in the 21st Century a true Maasai walks with his stick, big machete by the waist and stick by his hand. Maasai culture may appear intricate to those who don’t understand it, which is most of us but very fascinating at the same time. Role in the family/group are always determined by age, gender and position in the community.

Men are always warriors and herders while women always stay at home taking care of the children and fetch water and cook. Cows play a central role in Maasai’s life

Maasai families live in small traditional bomas (hut) which the women make from mud, sticks, grass and cow dung. Bomas are used for sleeping and cooking food for the families. Women leave them at dawn each day to fetch firewood and water. Children spend their days playing around the boma and are taught while very young to tend livestock.

Young men often smear their bodies with ochre and can spend hours working on ornate hairstyles which are ritually shaved as they pass into the next age. Although they live on large portions of meat and milk on daily basis, Maasai are slender and fit. There are different reasons why people from all over the world love Maasai from their distinctive way of life, dressing code beautiful beads or strength, just to mentions a few, but to me, Maasai remain a true beautiful flower of Tanzania.